When I started wearing historic clothing a friend very kindly sold me one of her old 14th century kirtle and help me alter it so that it fit me. It’s a miparti made from green and amber wool twill with 136 (!) buttons and I’ve loved it, I’ve felt so powerful and pretty in it.

When i got into sewing myself and started researching I got mainly into the 16th century (I’ve made a Flemish transition gown and I have plans for a early German renaissance gown and I which will write about both soon), and arriving at this year’s medieval week in Wisby, I knew I wanted to by fabric for 16th century clothing and though that I had left the 14th century behind me.

Wearing my miparti kirtle reminded me how comfortable 14th century clothes can be in comparison to later clothes (in my experience clothes get more complicated and more uncomfortable as the centuries progress). Further, watching battle of Wisby, which took place in 1360, reenacted, and seeing so many beautiful, simple kirtles and gowns, I felt like I can’t leave the 14th century. However, my pretty miparti kirtle had become worn, eaten by clothes moths and I had had to shorten it because people (including me) had stepped on it, and as you can see in the picture above it’s to short for me (a proper medieval kirtle should reach the ground, Andrea have written about it here).

Without any further research I decided I wanted a nice wool twill, preferably with mingled colours, as I thought this would look good in such a simple dress. I found an amazing green and grey, hand-woven fish bone twill that I fell in love with and fortunately, it was on sale. So of course, I had to buy it. Here’s some pictures of it, but they don’t really make the fabric justice. But hopefully, you can see the mingled colours and the beautiful shine of the fabric!

When I got home, I started my research! This most often include hours on Pinterest and different blogs and this time, a book as well. We bought it at Wisby museum, and they told us it was written by the museum, inspired by the reenactors that come every year for the medieval week. It was really informative, cost only 25 crowns, and inspired me to wanting to do a Gotlandic kirtle.

Below are some paintings showing to grey, possibly with mingled colours – (might just be that they’re shiny though, it’s not always easy to tell with these old paintings). I’ve noticed that the paintings seldom portray lacing or buttons, even if the the kirtles/gowns are really tight. I suspect that this have to do either with the artist not including that level of detail in the painting, or garments being laced on the side or back. To the far right is an exception, a painting showing front lacing.

Lacing and buttons is much easier seen on sculptures, such as the ones below, where we can see spiral lacing in the front to the left, and buttons on her sleeves to the right (side note: look at those impressing frilled veils!).

Inspired by the these paintings and sculptures, as well as the amazing kirtles I saw at battle of Wisby, I’m want to make a 14th century kirtle, laced at the front, and with brass buttons along the forearms. I’ve got a pretty clear vision in my mind, but I’ll probably spend some more time researching, this time focusing on construction as it would be fun creating a historically believable dress when I’ve this fantastic, hand woven fabric. 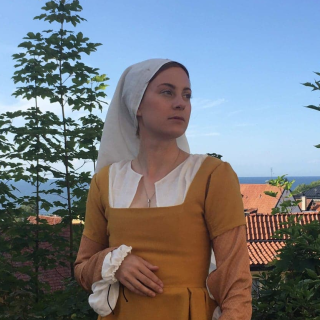 Hi, my name is Lou and I love creating things with my hands. I sew historic clothing (primarily 14th century and early German renaissance), knit and refashion clothes. I've noticed that I keep visiting the same problems: How much yarn do i need for a sweater? How do I make sure I don't make the sleeves too tight on my medieval dresses? Thus, I started this blog to document my projects with text and pictures to help me remember and learn from my previous projects. If you're into the same things, maybe it can help you as well!